Inday, who has been quite popular in the texting community for the past several months, now has gained attention in the mainstream media, reaching celebrity status.

Inday, also known as Sossy Inday or Inday Sosyal, is a fictional character portrayed in several text jokes as a nanny who answers in formal English when conversing with her amo (boss). In the Philippines, this is found funny as it is not common here to find a maid who speaks a more formal English than the amo. This is how the name Sossy Inday or Inday Sosyal came to be.

The very first Sossy Inday text joke started with a text containing a letter of resignation, as if written by an employee to an employer. But at the end of the text, it was revealed that it was written by Inday, a nanny.

I hereby tender my
irrevocable resignation as
your emplOyee, effective
tOday. It has been a
pleasant stay in ur company,
but owing to personal
reasons i am compelled to
move on.i would like to
thank you and your gOod
management for the
wonderful experience
accorded to me during my
stay in your cmpany..’

Unlike the first Ederlyn text joke, this is already amusing and worth forwarding.

The funny thing about Inday Sosyal is not only her skills of speaking formal English, but also the way in which she answers. She answers in a technical way, like a scientist or sometimes as if her words came from an encyclopedia, which makes her amo a bit surprised.

Inday: A change in the
weather patterns might
have occured wreaking
havoc to the surroundings.
The way the debris are
scattered indicates that the
gust of wind was going
northeast causing damage
to the path it was heading
for.

Don’t be confused as there are several SMS jokes related to Inday but portrays a different character than Sossy Inday, like the following:

Another interesting thing about Sossy Inday’s character is her comparison with Ederlyn. People from the texting community who knew and have observed the growth of Ederlyn as a character in several SMS jokes could notice that the fame of Sossy Inday, would somewhat follow the same path that was followed by Ederlyn. In fact, Inday also comes across accidents and experience romance, like Ederlyn.

Please pray for the quick
recovery of Inday. She’s
currently in the ICU because
of excessive nose bleeding,
which she had while
accompanying Junior in his
school’s Linggo Ng Wika
Celebration. Please pass this
to all whose lives, like mine,
have been touched by Inday.

And there are a lot more. But out of all of them, the most funny and exciting part is the one, where Ederlyn gets back…

…and steals Dudong, Inday’s boyfriend, forming a love triangle of some sort.

Inday and Ederlyn’s constant conflict with each other has made their characters more interesting in the texting community. But the fact that Inday’s popularity will supersede that of Ederlyn, is quite unexpected. 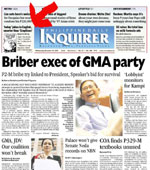 If we were to compare Inday and Ederlyn, there are 80 text messages about Inday circulating around and new ones are emerging every now and then, but Ederlyn only has 32 text messages as of today. While Ederlyn enjoyed a single account in friendster, there are two blogs made in the name of Inday, one in Blogspot, the other on WordPress.

To top it, Inday jokes were re-enacted by Maureen Larazabal last October 5 in one of the most popular gag shows on channel 7, the Bubble Gang. Just yesterday October 10, Inday was mentioned in Inquirer! (image courtesy of Tonyo)