Textspeak is a kind of language commonly used in text messaging where the words are abbreviated to fit the 160-character limit. In the Philippines, textspeak is done by disregarding vowels, retaining some consonants and replacing syllables with numerals. Many people today find it convenient to use textspeak when sending messages using their cellphones because it is faster and cheap. Below are some of the most common formats used in composing textspeak in the Philippines.

Acronyms – first originated in chatrooms, then were later brought into texting. They are more popular in other countries than in the Philippines. They also have a guide list of textspeak acronyms here. Examples:

LOL – laughing out loud
BTW – by the way

Contractions – the words are shortened by removing vowels and retaining consonants. Sometimes, some consonants are omitted as well as any double letters, but the message is still easy to read and understand. Unlike the Acronyms, there’s no need to refer to translation aids. See below for examples:

Phonetics – letters are read as they are being pronounced. This method can also use numbers as well. Examples are:

Special Characters and Homoglyphs – substitution of ordinary letters with special characters. A group of special characters may also be used to make an impression of an image to the receiver of the message. This format is commonly observed in forwarded quotes. Example:

The ¡ (inverted exclamation) is used to replace the letter i

A group of special characters making an impression of an image

TxtBuff Advice
Not all people are familiar with text speak. It is a new language which only some of the active texters could understand. We should learn to respect those who are not comfortable using the language. There are some who like to use textspeak and there are others who don’t. We believe that any language will keep on evolving and there’s nothing anybody could do about it. (source)

It is easy to see the evolution of languages from a simple look at the lists of new words added to the Oxford English Dictionary every year. There are always words, which a few years before, would not have been understood by anyone. Imagine this over many thousands of years and you begin to see the pattern in which languages evolve.

We can see it in our own language of English. If we look back to Old English, and the likes of Beowulf, the language is almost impossible to understand without some kind of translation aid.

The evolution of languages is a complicated and complex topic. It happens over many thousands of years, but what cannot be disputed is that language does change. 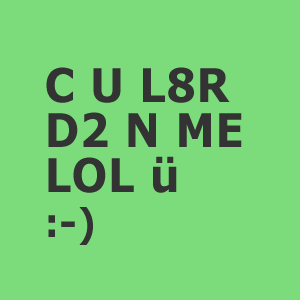 
2 Comments on Textspeak in the Philippines